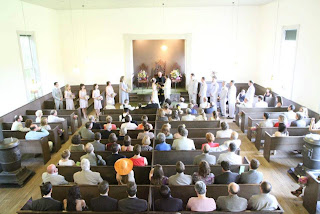 Marriage equality is a percolating reality in the United States, and “the same-sex people” aren’t the only ones benefiting from it. Along with the president’s recent, long-awaited endorsement and state laws trending in this direction, wedding customs are also evolving across the board.

Marriage ceremonies (even religious ones) are becoming more a proclamation of love and commitment, on equal terms, for gay and straight couples alike and less a public ritual during which one man drags a woman out by the hair and throws her at the feet of another man — a gratuitous paraphrase, but I’m sure I’ve heard similar text read at weddings in the past. Wedding parties are progressing, as well, and the tradition of “boys on one side of the aisle, girls on the other” is being adapted so that each spouse-to-be gets to stand with his or her tightest pals, regardless of gender. Bridesmen and groomsladies are indeed the way of the future.

As wonderful (and intuitive) as this progress may be, we’re still in transition and can’t expect everyone to evolve as quickly as these appropriate amendments to tradition take place. So in lieu of that expectation, those of us honored to be groomsladies or bridesmen need some guidelines to do the job well without becoming derailed by the anxiety with which others will inevitably bombard us. Because nothing evokes more anxiety for men than playing a “woman’s role” — and being an experienced bridesman myself (most recently in North Carolina, where a ban was just passed against marriage equality) — I’ve written the following tips specifically for bridesmen (though they can also be helpful for groomsladies and anyone involved in the development of wedding-party equality).

There are currently many people trying to deny women the right to choose, but you can’t be one of them, so as tempting as it is to insinuate yourself into your dear friend’s nuptials, the choice is hers. That being said, if you share a deep bond with a soon-to-be-bride, you’re a likely candidate for her party, if she’s having one.

Women have been the pioneers of wedding-party equality, brazenly breaking tradition to keep their besties in line on the big day. This coming out, if you will, validates many special and enduring platonic friendships between women and men (very often gay men), proudly reclaiming them and challenging the common perception that they’re based on invisibility and shame — the “fag hag” and her “fag.”

So, prepare to be asked and to say “yes,” honoring her wish to publicly affirm your binary-shattering mutual affection. However, if she tries to draft you into the brigade of her betrothed, consider sharing how meaningful it would be for you to be deployed on her side.

2. Complain about your suit.

Not literally, but here you might have to severely depart from bridesmaid rule of thumb. Your chapel-bound gal pal has good intentions in giddily galvanizing you, but bridesmen are a relatively new phenomenon, and she’ll have so much on her mind that when considering your wardrobe she may, for example, myopically recommend that you suit-up like a groomsman — if there’s a groom — whether the suits are aesthetically cohesive with her party’s gowns or not. This could be an immaterial concern (depending on what everyone’s wearing), but you want to avoid stealing unnecessary focus; looking like a last-minute link to the bridal chain, or like you accidentally wandered to the wrong side of the alter, will do just that.

Ask her about the bridesmaids gowns, and collaborate on a look that you can pull off and that captures the essence, colors, and style of the bridesmaids gowns, so that the bride’s tribe appears confidently distinct. (For example, if the maids are to wear lavender crepe gowns, and the groomsmen seersucker suits, then you might suggest a lavender summer suit for yourself, or pale gray with lavender tie and socks.)

Yes, you have more flexibility than the ladies (who could get stuck in teal or wine-colored sacks, with no room to complain), but with it comes a responsibility that you share with the bride to co-create a clear and respectable role for yourself, as well as for future bridesmen — attire being crucial to that.

Sure, this is standard bridal-party etiquette, but for you it’s a means of survival. While the families of the engaged aren’t likely to deride you directly, being the odd-man-in, you can expect to be the recipient of nervous laughter, strained jokes, excruciatingly awkward stares, and an overall visceral discomfort. An easy rapport with the bridesmaids will soften these blows by conveying your belongingness, and once you’ve bonded over the bachelorette weekend, they’ll proactively protect and claim you as a party member.

A surefire entree into the clan is to enthusiastically participate in planning the bachelorette events, with a soft, genuine curiosity (e.g., “What happens at a shower?” “Can we use Google Docs to budget for this thing?” “Must we wear penis crowns?”). Sharing what you know always helps, too, so offer something you’re good at (e.g., decorate a cake in the bride’s likeness, or design a signature cocktail utilizing the wedding theme colors); the gals will appreciate your naïve efforts.

As a warning, don’t let your being the only male involved get to your head and lead you to offer your stripping services. Unless you’re a pro and it’s as easy as tying your shoelaces, this will just be weird and could defeat your intent to form a secure attachment with the ladies.

Whom and what this day is about is certainly not up for debate, but when you’re cast against type in the eyes of your audience (imagine The Rock playing one of the seven dwarves!), you’re going to be more distracting if you try not to be noticed than you’ll be if you make active choices. So to ensure that the group focuses on the lovebirds and their revelry, you’ll want to address a few technicalities.

Clarify the bouquet situation: If she wants them, consider how harmonious it is for you to hold one, and if very, then great, but if not so much, then offer her a few creative alternatives — perhaps a boutonnière.

If she wants a standard recessional (meaning bridesmaids taking groomsmen’s arms as they exit), she may not have considered how this affects you or the groomsman who’ll be staring at you dumbfounded. I’ve been in this hot seat before and offered my arm to the confounded gentleman, thinking it better to confidently take the novel image of us walking together a step further than to passively attempt to blend in by taking his arm, or to avoid the issue altogether, likely causing an awkward distraction. The crowd laughed, relieved that an active choice had been made, and seemed to be left with an open mind rather than tense embarrassment. Collaborate with the bride on a flight pattern ahead of time so that your ceremonial moves are chosen and smoothly executed.

To avoid coming across like a lurking ghost in the wedding photos, advocate for having yourself placed in plain view, and allow the camera to capture your natural chemistry with the bridal team. When guests pass by and acknowledge only the ladies with comments like “you look so pretty,” rather than colluding with their desire to Photoshop you out of reality, deploy your smile teeth and say “thank you” with an easy charm.

Like a professional performer, you’ve set all your marks in advance and carved out the canal, so that when the moment arrives, you can simply flow through it. Now you can just radiate how genuinely happy you are that your dear friend has found a relationship that feels like home. By default you’ll be performing, and illuminating a very special kind of love between women and men.