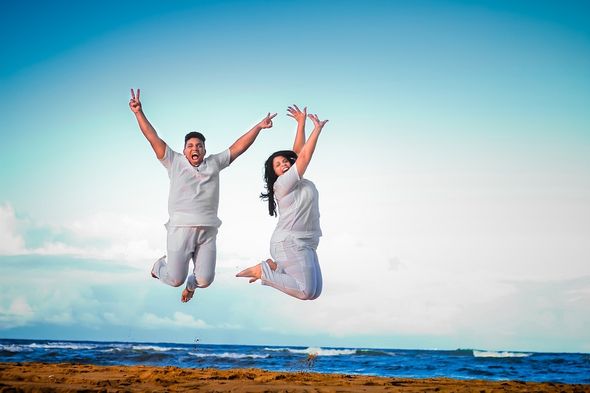 We are in a sweet spot for nuptials.  Every one of us has the opportunity to not know what we are supposed to do when we get hitched.  Just as same sex couples have done for decades, we can all–yes, straight people too–create our own events, rituals, and celebrations, completely on our own terms.  Exciting, right? I have even written a book on this phenomenon, “Modern Brides & Modern Grooms: A Guide to Planning Straight, Gay, and Other NonTraditional, Twenty-First Century Weddings,” (Skyhorse Publishing, 2014 Hardcover; 2017 Paperback) which is now out in audiobookform, narrated by me.

And yet, many of the questions I am asked–by the media, but also in life (mostly by straight people)–are about same sex wedding “etiquette.”  As if the great opportunity of Marriage Equality is to lead gay people to the strict, mind-numbing trappings of conformity, rather than to wake us all up to creative freedom.

Before we continue, I’d like to share my feelings about wedding “etiquette.”  And the best way to do that is through the following lyrics from the song“They,” by Jem.  (I encourage you to listen to the entire song, here).

Who made up all the rules?
We follow them like fools,
Believe them to be true,
Don’t care to think them through
And it’s ironic too ‘
Cause what we tend to do Is act on what they say
And then it is that way

Again, we all have an opportunity right now to free our minds, and to be creative in how we celebrate our unique loves.  So why would any of us, regardless of our gender or the gender of our partner, do a search-and-destroy for arbitrary rules to cramp our style?

Here are some of the questions I have received from people who want same sex wedding “etiquette” to be a thing:

“First I would say that the beauty of marriage equality is that we no longer have to categorize same sex vs. opposite sex weddings. Weddings are weddings.  And we have the fantastic opportunity to rethink all of the marital traditions we’ve mindlessly accepted over the years.  All weddings at the core, celebrate the choice two people make to live their lives together, in a way that is loving and public and protected by the law, regardless of their gender.  The Supreme Court’s ruling on Marriage Equality in 2015, was symbolic of our views on marriage evolving as a people, in general.  Weddings began with women being given away as property from one man to another.  But now at weddings, we celebrate equal partnerships between two people who love each other, whether they are female, male, gay or straight.   And so, I can’t really answer your question without that context.  Because bridal whites are of course associated with that age-old tradition of women as the virginal property of men.  (Queen Victoria popularizedthe white dress as a symbol of purity in 1840, and Western culture has not questioned this tradition since.  And yet, ironically of note, the tradition of women proposing to men did not catch on at this point, even though it was Victoria who proposedto her husband, Prince Albert.).  Now that women are (fortunately!) no longer considered property, and even have the freedom to do the proposing themselves (to a man or a woman), the significance of some of these traditions–like veils and white dresses–can be rethought. So, do I think there is anything inappropriate about a guest wearing white to a wedding, regardless of the genders of the spouses to be?  Not at all.  As long as you first check in with the couple to make sure your outfit won’t steal attention away from their moment.  And that’s a decision for each nuptial-bound pair to make themselves. (Unless you believe Queen Victoria should make that choice for them…) So, no matter what kind of wedding you’re attending, check in with the bride(s) and/or groom(s) about your outfit.  If they’re both wearing matching lime green rompers (or romphims), for example, you’ll want to save yours for another occasion.”

But after hitting *send,* I decided to do something truly subversive: interview the interviewer.  I sent Alexandra a few questions of my own, so I could better understand her interest and process in writing the article.  This way we could keep an openness between us, and not just end our dialogue with my glib opinions.  She responded:

“[Writing this article] I learned a lot about gay weddings and the details that in a hetero wedding are laid out for you: whose name goes first on the invitation, if they take each other’s last names, where to sit during the ceremony,walking down the aisle. I thought a lot, too, about how much focus is placed on the bride leading up to the wedding and how little focus is played on the groom. That changes when you have two grooms.”

Alexandra’s discoveries here are significant, even if they are all things of which a queer person is already innately aware.  Nevertheless, I slowed myself down as I read her response, and respected where she was in her process.  And in so doing, I find that I very much appreciate her active curiosity about same sex weddings. After all, curiosity is what leads to greater empathy for each other.  Which can eventually lead to rethinking traditions that stifle everyone’s creative freedom.  We need more curious, empathic people like Alexandra with whom to engage in conversations about tradition and equality as we make room for more of us to have full lives.

Alexandra said her guiding question for the article was, “How do you navigate the wedding landscape as a gay couple?,” which I respect, even if I disagree with her premise: that a woman wearing white is necessarily a problem for any wedding bound couple.  This is all to say that I hope to stay in dialogue with Alexandra as she continues her inquiry: “I am never done exploring a topic,” she says. Not necessarily on the topic of wearing white, but “there were other trends I came across during my research that I have tucked away for other stories.”   I look forward to discussing whatever she discovers with her.

The more I think about it, in some ways I do understand why people are interested in wedding etiquette.  As a people, we want customary guide posts to ensure we are polite to one another.  But at the same time, our sense of “polite,” “proper” and “normal,” can go too far, and imprison us.  Which is why we must also take it upon ourselves to stay awake and curious about life that is off-trend.  We must rethink traditions; make personal choices on a case by case basis, without feeling trapped by what our mother or father did, or Queen Victoria; and we can stay in dialogue with each other as we do this.  Even as we approach new territory–like marriage equality–from different angles.

So though I wrote a whole book on creating your own marriage celebration your way, the only wedding *etiquette* advice you will ever hear from me is this: Check in with each specific spouse-to-be before their specific event.  Ask them questions, and receive their answers.  Respect individuality, independent thinking, and creative freedom.  Theirs, and also your own.

I will now leave you with one more Q&A between a journalist and me:

Q: “What are some same-sex wedding trends you’re seeing?”