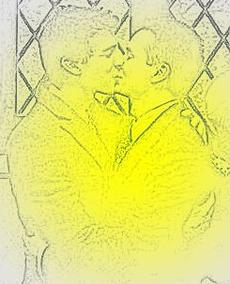 This piece first appeared on The Huffington Post, November 13, 2014.

Before my husband was on The Real World, we met in a realer world: the closet.

As bullied — and consequently failed — high-school students, we found each other as “refugees” on “The Island of Misfit Teens”: an early-admissions college known as Simon’s Rock. Project Runway‘s Nina Garcia would have kicked us out for our “styling”: torn jeans, half-shaved/half-long hair, flannel, Birkenstocks, acne. We were 16, and it was 1993. Same-sex marriage wasn’t legal; there was no Internet to learn how much “better” it would get; Ellen had not yet declared, “Yep, I’m gay”; homosexuality meant “AIDS.” There were no appealing realities for a gay teen to dream himself into.

But Justin was braver than I was and trusted that his own private world could be just as real as the one surrounding us.

After two weeks of watching me, stalking me, and making me laugh, he made a bid for his dreams: “I guess I’m attracted to you,” he said.

Six years later Justin would put forth a dreamier image of himself, care of MTV: platinum-blond pixie do, fashion jeans, and crystal-clear skin. I would watch him — the way he had once watched me — and dream of a happier outcome for us. If only I had trusted my dreams, or his, when I had had the chance.

Before all of that, my mom had taught me to dream, singing “Dream a Little Dream of Me” like Mama Cass, and “Sweet Dreams” like Patsy Cline, while changing diapers or folding laundry. But I never trusted the euphoria that flooded her when she wanted something, because she became equally flooded with fury and or despair when she didn’t get it. “That’s not how it was supposed to be!” she’d cry. She refused to negotiate with reality when it took her dreams hostage, and this not-so-sweet sight made me afraid to want things.

But her commitment to a world more livable than the one thrust upon her — not unlike 16-year-old Justin — was indeed a great gift, one she literally gave me in the form of a puzzle depicting a Pegasus flying by moonlight with the caption “Follow Your Dream!” I would eventually learn to receive this gift — though not before interrupting Justin’s bid for love, in the name of “reality.”

I received further instruction on following my dreams from the cartoon Simon in the Land of Chalk Drawings, about a boy who made his own world with a piece of chalk. I loved it. I would sing along with Simon, “The things I draw come true….”

And then I drew my own world into reality with a piece of chalk — yellow chalk, turning the street where I lived into the Yellow Brick Road, you know, so I could be Dorothy and skip off to see the Wizard. I only got through about 12 bricks, but the world then had more room for my dreams to live than before.

In time I would be brave enough to draw a road to a livable life, one that would reunite me with Justin.

When I rejected him — with the nasality of a petulant teen — my dream to be normal had one up on my dream to love what I loved. But the road to normal only led me to… nothing. In black and white.

Fortunately my desires eventually jolted me out of the closet and into my body. I began to commit to my technicolor dreams, like my mom did. I took flight, made bids for love… and fell flat on my face. Again, and again.

But unlike my mom, I discovered how to fall better. Rather than revert back to the closet or fixate on how things were “supposed to be, I learned to have my dreams and reality too, to be a dream hostage negotiator.

Yes, reality would always be there to give me the hand and say, “You shall not pass!” — as I had done to Justin. But the trick, I found, was not to retreat or have a tantrum but to feel the blow of disappointment and then adapt, to keep drawing my yellow bricks — perhaps in a new direction — until the world, transformed by my impact, had enough room for me to be in it. My road may not lead all the way to Oz, but it could take me someplace better, where my passions, desires, realities, and dreams could live together. Free.

For example, flash-forward to the present and consider the legal status Justin and I now enjoy as a married couple. Back in 2006, as New York residents getting same-sex married in Massachusetts, our marriage was not legally recognized — anywhere — due to the state laws at the time. But we were not deterred. We. Were. Having. A. Wedding. So much conviction had we that when The New York Times rebuffed our bid for a wedding announcement, with the harsh hand of “reality,” offering the option to announce a “commitment ceremony” instead — as if to say, “But we can still be friends” — we declined. Now, just a few years later, our marriage is recognized to the fullest extent of the law. So you see, with time, facts may prove to be less real than dreams.

My dream to be with Justin took hold of me six years after I’d given him the hand. I was watching Tom Stoppard’s award-winning play The Invention of Love with my scholarly friend Dinah. Well, not really: Dinah never lets me forget I was asleep for most it. But I awoke for the most important scene: The protagonist, a college student, expresses romantic love for his male best friend and gets rejected. The words fertilized my dreams. One year later I would perform the very scene on stage, with Justin — then my boyfriend — in the audience, hearing me say the line “You’re half my life.”

So how did I negotiate with reality to rescue my dream? Well, I began by committing to it.

When my brother Mike said one day, “There’s this guy from Simon’s Rock on The Real World — he’s really smart, and gay,” I knew it was Justin. You see, he had colonized my inner world ever since the Stoppard play, so I had already drawn a few yellow bricks in his direction. It had to be him. Viewing parties with my girlfriends commenced.

We watched faithfully, every week, with starry eyes. I know, it sounds like we were all in our pajamas, facial masks and curlers, on a big bed, painting each other’s nails, right? Well, so what if we were? I needed support; the space between reality and dreams is too stimulating to occupy alone.

Justin was much cooler and self-assured and more glowing than I remembered. But I recalled his vital humor, and even more so his melancholic, no-one-understands-me sort of vibe, which made me gravitate to him. I mean, to the TV.

We were the two characters from the Stoppard play, he and I. But we were also both the protagonist — both having tolerated silent abjection, both pressured to contain our flames. My desire to find him, hold him, have him — the way things “were supposed to be” — was now ablaze.

Then came the pivotal episode. His TV roommate asks, “Justin, why don’t you talk to us?”

He replies, “Remember that school I went to? When I was 16? Well, there was this guy….”

Cue sounds of screaming girls, in pajamas and curlers.

Justin: “His parents took him out of school and put him in a monastery.”

My friend Joy: “Your parents put you in a monastery?”

Me: “Well, no, but he must have exaggerated that part.”

Joy: “You should write him a letter.”

And then one day I told him what had inspired me to write the letter.

It was a sunny afternoon in Boston Common, six months into our coupledom. We were on a bench. He pointed and said, “Doesn’t that look like Ellen DeGeneres?”

“No,” I replied, giving him the harsh hand of “reality.”

You see, Justin was going through this phase where he’d “spot” iconic lesbians with regularity. (I mean, he had seen “Martina Navratalova” only the week before, in a deli in Providence, and “Melissa Etheridge” the week before that, on a Bonanza bus.)

But this time he was right! It was Ellen! She was playing frisbee with Anne Heche, and a film crew, on the lawn behind us. They were as validating a queer couple as we had in 1999, or more crucially, that’s what I dreamed them to be. (That was before we learned Anne was part alien.) What a perfect moment to discuss the trigger for our own romance.

I said, “Remember when you were, like, talking about me on TV?” Pause. “You know, about how you came on to me and how I left school? And then you said that thing about the monastery?” Double pause.

My friend Joy, the one who’d told me to write the letter, puts it best. Joy officiated our wedding, and during the ceremony she told our “creation” story. She explained that Justin was not talking about me on the show.

And also that he was.

This post has been adapted from Mark O’Connell’s book Modern Brides and Modern Grooms: A Guide to Planning Straight, Gay, and Other Nontraditional Twenty-First-Century Weddings (Skyhorse, November 2014).