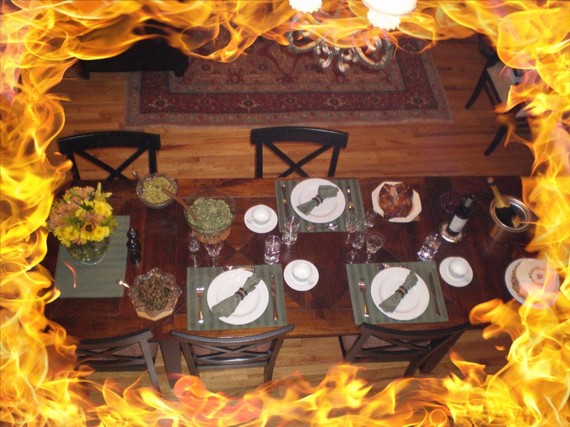 The election will come up at our Thanksgiving dinners.

We will have things to say and questions to ask.

And we will need to feel safe for those necessary exchanges to take place. (None of us can think or speak clearly when in physical or emotional danger.)

But how can we create safety between us when we’re all severely split between them and us; right and wrong; black and white? This election has been more vicious, personally divisive, and chaotic than any we have known, and none of the self-helpy platitudes we are told—e.g., “put your differences aside,” “it’s time to move on”—are enough to make us feel safe together. We can’t even agree on what the word “safe” means…

We All Feel Unsafe

This past weekend, President-elect Donald Trump, tweeted, “The theater must always be a safe… place,” and accused the cast of the Broadway show, Hamilton of having “harassed” Vice President-elect Mike Pence, who was in the audience the night before. The incident to which Trump referred was a post-show curtain speech, in which actor, Brandon Victor Dixon, addressed Pence directly and open-heartedly asked him to consider the rights and freedoms not only of the diverse people on stage but also of those all across the country who feel incredibly unsafedue to Trump and Pence’s proposals—which discriminate against women, Mexicans, Muslims, and the LGBT communities—not to mention the disturbing news of Trump appointing men who espouse white nationalist/ supremacist ideologies to his cabinet, and refusing to disavow the neo-nazi groups who have embraced him.

So, in reality, who is actually unsafe: Pence? The actor who shared his concerns? Both? Neither?

That depends on who you ask. And you will get lots of different answers from different people all over the country, each of whom is fired up with certainty that they are right. The objective answer may seem (painfully) obvious to you, but logic and fact mean nothing to those whose minds have split into us vs. them—which is all of us when we feel desperately unsafe. And we all feel that way right now. The legions of minorities who have been targeted by Trump and physically attacked by his supporters, as well as the straight white people who continue to scapegoat them. (Consider that those who live in homogenous, isolated, communities tend to feel threatened by people who are very different from them, and no amount of explaining the value of diversity to them will transcend their fears enough to engage their minds.) Our various perspectives could be understandable to one another if we had the opportunity to do intensive family therapy as a nation. But we don’t, and we are all stuck in this hot perpetrator/victim dilemma together for the foreseeable future.

So we’ll have to do our best to simply get through this Thanksgiving holiday without harming anyone or being harmed. And that means keeping our expectations low, and our goals super specific.

Make your primary goal to connect over being right.

That means don’t look for stats and videos and memes and other bits of evidence on your phone to prove your point on this particular occasion. But instead make efforts to look family members in the eyes and tell them how you feel. And let yourself be curious and empathic about how they feel in turn. You don’t have to understand their feelings completely. Just be sure to let them know, in a neutral manner, that you have taken in exactly what they said. And assure them that you will keep them in your mind as you continue to process what is happening in our country. And ask them to do the same for you.

Again, in order to share your feelings effectively, you’ll need to make sure that everyone feels safe. A simple practical way to do that is to begin each statement with “I”—as opposed to “You,” which will automatically make your listener defensive and defeat your purpose.

In the same spirit, make sure that your questions on this topic are of the, “How has this election affected you, personally?,” variety. And encourage them to use “I” statements in their answers as well, to help you take a walk in their shoes.

The Debates are Over

If you exchange personal perspectives using “I” statements, there is nothing to debate. Once the conversation strays into battling opinions about scandals, emails, the electoral college, or policy proposals, it’s over. You’ll be caught in an escalating power struggle between us and them, and the divide between you will widen. Like I said, we are split into emotional extremes at the moment. No amount of “objective fact” is going to change anyone’s mind about what happened. We will do better to let each other know how what happened impacts each of our lives.

Drunkenness only aggravates passionate disagreements. Save getting your buzz on for later, when you can decompress with a close friend or significant other in peace.

Open and close the discussion with a prepared line that everyone can agree on. This will give you all something to hold onto. Try something like: “We need more jobs in America AND we need to stop the hate. We ALL need to advocate for both.”

If you can all agree on that, then there’s really no more to be said on the topic at this time.

If you can’t, then the split in your family is clearly too great to make a connection, and you’ll have to footnote common ground for later.

I always encourage people to build bridges instead of walls, unless their safety will be compromised by doing so. So if you feel unsafe, threatened, or attacked, in any way, then extricate yourself from the situation. You don’t owe anyone anything more than an attempt to connect in a safe environment. That also means there’s no need for you to attend a family event if you have nothing to look forward to but a lack of recognition and lots of hostility. (e.g., If you know in advance that when you say, “As a minority I fear for my safety,” the only response you’ll get is “You liberals are hypocrites,” then spend the day somewhere safer and better).

Think of this holiday as the beginning of a long process of mutual recognition between you and your family members. Don’t expect to feel fully seen by the end of the evening, or to see them clearly either. Think of the long game. Again, the ultimate goal is to be connected, not to be right. So do what you need to do to feel safe and connected at the same time during this one day, if that is possible. The things you say may not make sense to all of them in the moment, but some of them very well remember what you said, and reflect on your words over time. Especially if you stay in contact, including in easy, non-committal ways, such as over social media, or email, or text. Eventually you may be able to see each other’s points of view more clearly, and if not, at least you will be more likely to have each other’s backs when the government turns on one of you or the other.

Seek Information From Multiple Sources and Consider Them All

Don’t just follow my advice, I would never presume to have all the answers for you. I only offer suggestions based on my own clinical and personal experience. Use what helps you. And be open to contrasting ideas. For example, The New York Times has published a list of post-election holiday tips as well, and some of them conflict with mine. But consider them all anyway. Check out a variety of approaches, and choose which ones might work for you in various situations, with various people, at various times. There is never just one way.

Remember, our lack of capacity to hold multiple perspectives in mind at the same time is partly responsible for the toxic divide in our country right now. Practice thinking in terms of multiplicity and possibility instead of one way or the other/ my way or the highway.

For most of us, Thanksgiving won’t be emotionally nourishing this year. But it can be a small part of a long, productive and meaningful, conversation with our families. That is, if we are clear on what he have to say, what we need to hear, and what we do NOT need to hear under any circumstances (e.g., hateful language directed at any particular person or group.)

And we can find opportunities to nourish ourselves independently. That means indulge in that yoga class you attend the day before; or the run in the park with your dog the morning of; or the on-demand movie you’ll enjoy when you return home that night, snuggled up in a warm bathrobe on your couch, along with homemade waffles and fresh whipped cream.

And make sure to exchange loving words with people who make you feel seen and heard, and whom you see and hear in return. The more you care for yourself, and the more contact you have with those who care for you, the less thrown you’ll be by relatives who could not care less how this election has affected you.